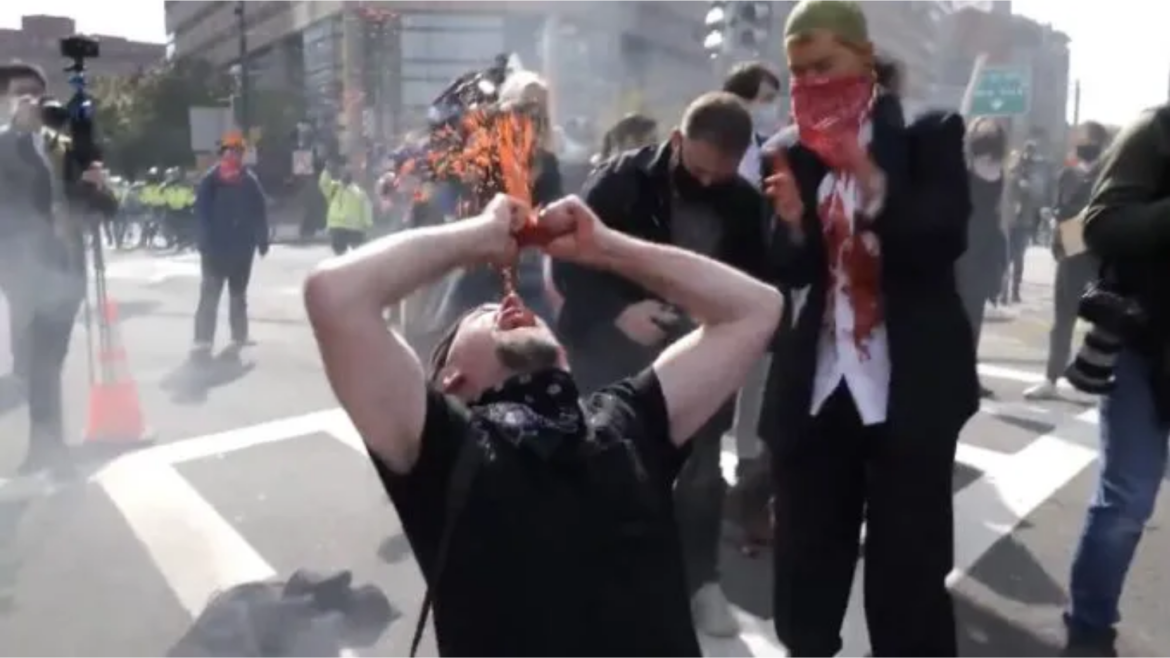 The sickness of political violence is growing in our society, and we do not seem to have the will to stop it.

Reposted from The Federalist – Written by David Marcus

Let’s do a little thought experiment. Let’s say you and 15 or 20 of your friends are Philadelphia Eagles fans and you were walking down the street when you saw a couple in Dallas Cowboys gear eating at an outdoor restaurant. Let’s imagine next that you are so offended by the sight of them that you start screaming at them, upending their drinks, and throwing lit fireworks at them.

What would you expect would happen to you and your friends if police were in the vicinity? At the very least, you would expect them to stop you, if not arrest you or issue you a summons. And they would be right to do it. That is their job.

Saturday in Washington DC and all over the country for months now, this kind of behavior has been used against President Trump supporters, or even just people who refuse to be compelled to make political gestures in support of the left. But unlike my hypothetical above, the police have rarely if ever intervened, and leftist media and Democratic politicians have refused to specifically call out the actions.

What is most bizarre about these acts of political intimidation and violence — and, yes, throwing lit fireworks at people is violence — is that the perpetrators seem to have absolutely no fear that anything will happen to them. Really think about that for minute — not from the perspective of the people being accosted, but the perspective of those doing the accosting. You would absolutely imagine, correctly, that there would be repercussions. It’s not why you wouldn’t do it, but it’s something that you naturally would and should expect.

Perhaps the most troubling aspect of the rise in leftist political intimidation and violence is that these “activists” seem to have no expectation that there will or should be any consequences to their anti-social and illegal behavior. They don’t just think that the rightness of their cause justifies their actions; they really believe it justifies, and even demands, that nobody — not the police, the media, or the politicians on their side — call them out for it at all. And they think that because it is exactly what is happening.

Take the case of two attorneys in Brooklyn arrested for throwing lit Molotov cocktails into police cars. What did these people think was going to happen to their promising careers and lives if they committed this horrible act that could have killed people? Why didn’t the threat of consequences stay their hands?

The clear and obvious answer is that much of our society, and almost all of the elites in our society, have sent them a clear message that there are no consequences for leftist political violence, nor should there be. In fact, the news media runs apologetic features about how sad the whole situation is.

When Antifa sets fire to police stations and Democrats in Congress call it a myth, or say it’s Donald Trump’s fault, when the media makes excuses for them, and when all Joe Biden can muster is a bland, general statement against violence with no specifics, they are obviously emboldened.

So now the problem is twofold. Not only have the people committing these actions justified it in their own minds, but those in a position to condemn and curtail it have internalized those justifications. Without quite saying it out loud, they have come to believe and communicate that we are in a political moment so unjust, so fraught, that political violence is justified.

It is difficult to imagine a mindset more dangerous to a free society. It is absolutely psychotic. When stores across the country boarded up before Election Day in anticipation of violence, it sent two clear messages. First, that police and the city governments have absolutely lost control over protecting lives and property, and second that these store owners have to come to accept this as normal, as natural as a hurricane, boarding up windows in exactly the same way they prepare for storms.

But this is not as natural as a hurricane. It’s bizarre. This is evidence of a deep sickness growing in our society. The new normal that Americans should really be afraid of right now has nothing to do with the coronavirus and everything to do with political violence For the latter, alas, there is no vaccine.

It also did not spring from any wet market or lab. In 2018 when Democratic Rep. Maxine Waters urged her supporters to confront and attack (at least verbally) Trump supporters in restaurants and at gas stations, she was normalizing a deeply anti-social practice that has only flowered into more violence.

A step back needs to be taken now. None of this normal, none of this okay. None of us, to go back to my thought experiment, really imagine we are or should be allowed to do these things. To those who would argue that politics is more important than allegiance to a football team, I would ask them to think about how short the bridge is between throwing lit fireworks at human beings and shooting them with guns. Once you have abandoned condemnation at the former, the door is wide open to the latter, and people will walk through it.

Right now this is a problem. In short order, it could be a crisis. All of us have a responsibility first and foremost to recognize what is happening, condemn it, and demand that it stop right now.