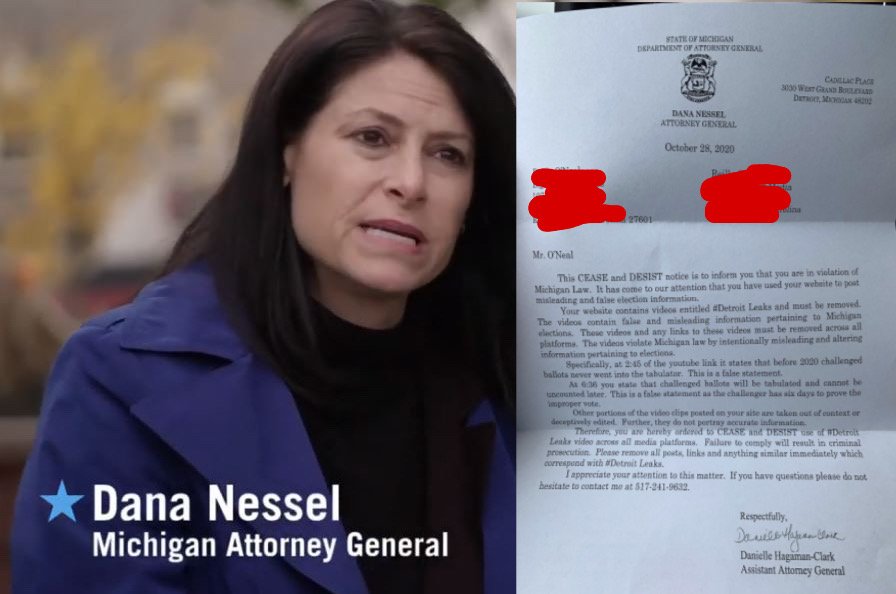 Reposted from the Gateway Pundit

The intrepid reporter who broke this story, Shane Trejo, was also one who was a witness for the voter fraud in Detroit. Trejo says he considers this “witness intimidation” and is fearful that it will be used as pretext for some criminal actions.

In the shocking letter dated Oct. 28, the Michigan Attorney General cites to two or three factual errors in the bulk of Trejo’s reporting and demands on behalf of the Michigan government to take every single article related to #DetroitLeaks off the internet.

Shane received the letter today.  It was marked October 28.

The #DetroitLeaks reporting shows Detroit poll workers who were trained in how to lie, trained on how to handle ballot challenges from Trump supporters, told to call 911 on any challengers and to use COVID as an excuse to deny poll challengers access to view the ballots as they were being counted and tabulated.

The series of leaks also revealed that even challenged ballots would be processed as regular ballots. Incoming State Representative Steve Carra and Michigan activist Bob Cushman filed a successful lawsuit against Michigan Secretary of State Jocelyn Benson over the explosive allegations that poll workers were being trained in how to commit voter fraud.

This information was previously banned from YouTube, Twitter, and other social media platforms.Are Democrats trying to steal the election?Yes No  Completing this poll entitles you to The Gateway Pundit news updates free of charge. You may opt out at anytime. You also agree to our Privacy Policy and Terms of Use.

Multiple independent witnesses have approached the Gateway Pundit and confirmed that the predictions from #DetroitLeaks were accurate, and that the counting of ballots for Wayne County/Detroit at the TCF Center (aka Cobo Hall), was by poll workers who refused challenges from poll challengers, used COVID as an excuse to deny access to review the process, tabulated challenged illegal ballots, and fulfilled this voter fraud prophecy.

With the electoral votes critical to the re-election of Donald Trump, this information will be critical to demonstrate the state of mind and intent of the poll workers who delivered a very suspicious Michigan victory to Joe Biden.

The timing of this letter coincides with another round of social media purges in Michigan of Facebook groups that might document and prove the allegations of voter fraud.