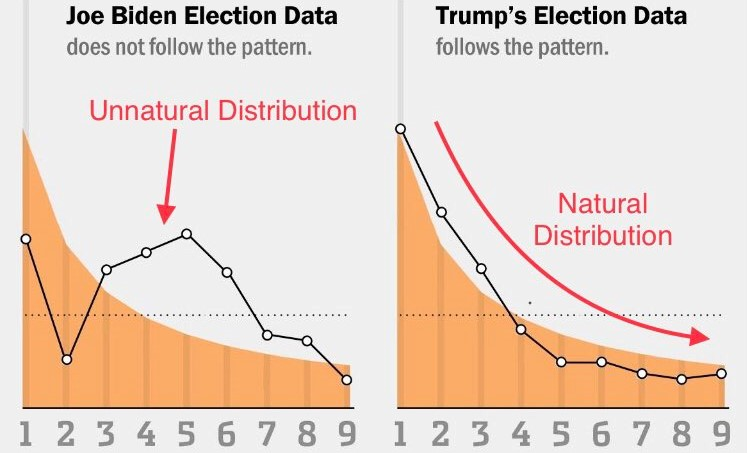 As the vote counting for the 2020 Presidential Election continues, various facts suggest rampant frauds in Joe Biden’s votes. So does mathematics in terms of the votes from precincts.

Benford’s law or the first-digit law, is used to check if a set of numbers are naturally occurring or manually fabricated. It has been applied to detect the voting frauds in Iranian 2009 election and various other applications including forensic investigations.

This is what described by Wikipedia:

“Benford’s law, or the first-digit law, is an observation about the frequency distribution of leading digits in many real-life sets of numerical data. The law states that in many naturally occurring collections of numbers, the leading digit is likely to be small.

One of the examples is the population of the world, which are naturally occurring numbers.

A number of people on the internet have checked the votes (precinct by precinct) of Joe Biden, Donald Trump as well as other candidates for their legitimacy in terms of the Benford’s Law.

According a Reddit user, r/dataisbeautiful’s calculation, the ‘normal’ distribution of first digits for the different candidates based on Benford’s law is illustrated below.

Youtuber Nyar has shared the observations on a number of counties, concluding that Trump and others’ votes have natural distribution but not for Joe Biden’s.

In Fulton County, Georgia, which overlaps with the Atlantic metropolitan where Joe Biden is expected to win, all of the three candidates have normal distributions for their votes. (Joe Biden 72.6%, Donald Trump 26.2%, Jo Jorgensen 1.2%. Source: .theguardian.com)

However, in the Milwaukee County of Wisconsin, which is in one of the key swing states, Joe Biden’s votes violate Benford’s Law while other candidates’ don’t. (Joe Biden 69.4%, Donald Trump 29.4%, Jo Jorgensen 0.9%. Source: theguardian.com)

And in Chicago of Illinois, Joe Biden’s votes are abnormal.

So does that of Allegheny of Pennsylvania which includes Pittsburg. (Joe Biden 59.0%, Donald Trump 39.9%, Jo Jorgensen 1.2%. Source: theguardian.com)

It looks like maybe Biden had lost big cities like Chicago and Pittsburgh, which is why the fraudulent votes need to be brought in, which skew his curve away from a normal looking one.

For those who are interested to reproduce the analysis, you can follow the instructions here and give it a go.