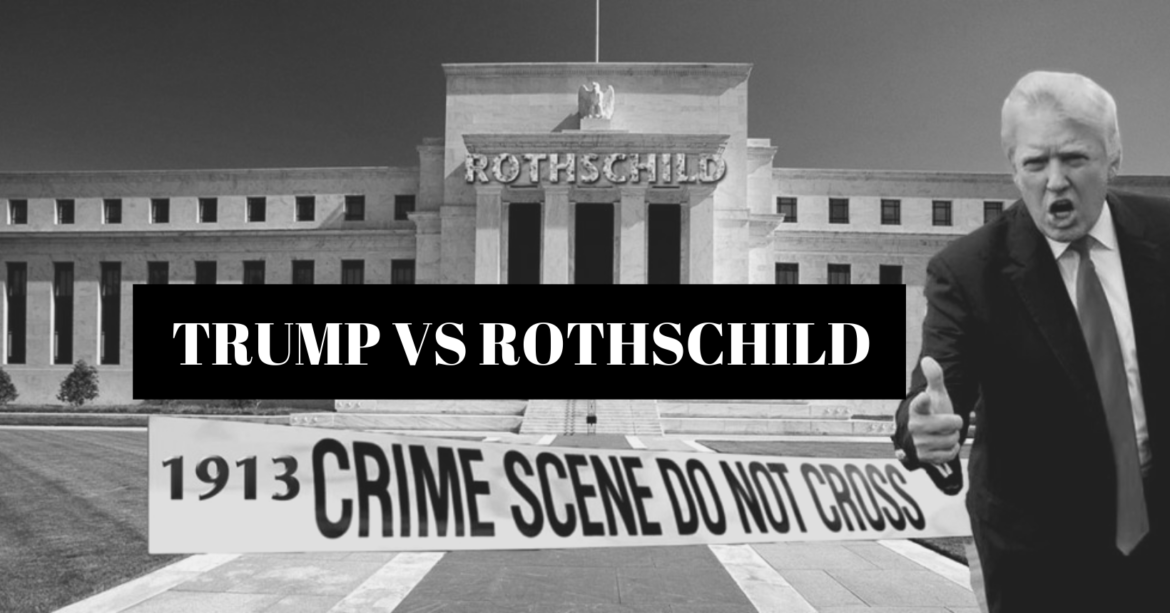 “Give me control of a nation’s money, and I care not who makes the laws.” Mayer Amschel Rothschild

“The real rulers in Washington are invisible, and exercise power from behind the scenes.” – Felix Frankfurter, Supreme Court Justice, 1952

At the end of March 2020, with the passing of HR748 (The Cares Act for Covid 19 relief), the Federal Reserve was merged with the Treasury Department, and brought under the jurisdiction of the Executive Branch, making President Donald J Trump our “defacto Fed Chairman.“

You may have missed this story since it was barely reported in the media, and our president is not talking about it. Major steps are being taken to undo the damage that powerful banking families (and their puppets) have done to our country and world. This is exciting! I will show you how his actions are not unlike what two other American presidents did when they were in office, which may have had something to do with their assassinations.

Trump is No Friend of the Fed

A few weeks before passing the Cares Act, the president spoke strongly against the Fed:

He then made an unprecedented move. He brought the Fed into the jurisdiction of the Treasury Department with the passing of the Cares Act!

From John Michael Chambers: “In laymen’s terms : HR748 is a big step in the nationalization of the Fed. Taking control over the Fed’s ability to decide what to do with the money they print. That decision is made at the Treasury. The Treasury answers to the Executive Branch. Oh yeah, who’s in charge of the Executive Branch? President Donald Trump. So there’s your defacto Fed Chairman. A lot of people are saying President Trump is just doing the same thing as Bush and Obama; just printing trillions of dollars, and kicking the can down the road. But that liability ends up on the Federal Reserve – on the private bank’s balance sheet. We the people have the collateralized assets of this debt, and the interest payment. This is the bottom line.” Read more here

The Fed owned 14.6% of the US Treasury bonds as of March, 2020. Trump forced their hand to buy up, not just billions, but unlimited bonds. With this unprecedented move, the Fed will now have to buy up bad loans, and will own the debt through BlackRock’s trading. With these changes, the Fed now must wager for the economy instead of against it. This is why Trump took this action; it was for the American people. The Fed has been deceiving the American people for over a century, since the passing of the unconstitutional Federal Reserve Act in 1913.

From Alan R. Adaschik’s book: 100 Years of Deception: A Blueprint for the Destruction of a Nation:

“In 1913, Congress made the Federal Reserve Bank the central bank of the United States. This name is the epitome of deception. First of all, because of the passage of Amendment XVII, we no longer had a “federal” government. Amendment XVII transformed our federal government into a national government. Thus, there was nothing federal about the Federal Reserve Bank. Furthermore, it is not an agency or a part of our government. Instead, it is a privately owned banking cartel accountable to no one other than the people who own it. The Fed is not reserve of any kind and has nothing to do with reserves. Finally, it is not even a bank because no one deposits money with the Fed.

The best description which applies to the Fed is that it is a money pump for those who own it and this enables these people to harvest huge amounts of money from working Americans without giving them anything in return. In other words, the Federal Reserve Bank is a racket far worse than a Ponzi scheme or Mafia created con game. However, the tragedy of our situation is that the Fed is racket which Congress made legal by voting it into existence.”

The following is a list of changes which would be to our benefit had Congress not passed the Federal Reserve Act.

Behind the scenes, the family dynasties that own the world’s central banks have more wealth and power than anyone on Earth, although there are other big players on the world stage. But a few very wealthy individuals control much of our world, including politicians, propaganda, information, technology, Hollywood, and all the big money industries. The Rothschilds alone are estimated to be worth $500 trillion or more.

President Trump has gone after the deep state, the military industrial complex and the untouchable, bankster elite that sit on the top of this world’s power pyramid. This is the “swamp” he is intent on draining! This is the reason he’s been investigated, impeached, attacked, and slandered. It is the reason the bankster elite have forced their puppets (in politics and the media) to commit treason. It is the reason we have the Scamdemic, and possibly biological warfare, which they used to justify medical tyranny and draconian, unconstitutional abuses. It is the reason we are now living in an alternate reality where China, Soros, corporate oligarchs and medical and technological tyrants (all high ranking puppets of ones on top) are financing rioting and Communist revolution in the USA.

This short video from Greg Reese is chock full of great info:

Michael Tellinger, who has led a huge campaign against central banks, has this to say about Trump’s move against the Fed: “President Donald Trump breaks a 250-year long stranglehold of the Royal Political Elite and their central banks. Since the 1760s and the rise of the Rothschild banking empire, the world has been held hostage by the global banking elite families, led by the Rothschilds – creating the largest organized crime syndicate on Earth – larger than all other crime syndicates combined – more brutal, more bloodthirsty and yet completely visible to all. They have abducted, tortured, bribed, extorted and murdered all their opponents to stay in control. They launched most of the wars in history, invaded countries and removed any threat with brutal force over and over again. They have more blood on their hands than all other crime syndicates combined. Many honest leaders, presidents and prime ministers have tried to free their countries from the banksters’ stranglehold over this period, but so far, in over 250 years, no one has succeeded.” Michael Tellinger

Trump has Hijacked Rothshilds Central Bank in the USA

Like Kennedy and Lincoln, Trump is Going Up Against the Most Powerful Banking Family Dynasties, and They Hate Him for It!

On June 4, 1963, 5 months before his assassination, John F Kennedy signed Executive Order 11110, which returned to the U.S. government the power to issue currency without going through the Federal Reserve. This gave the Treasury Department the power “to issue silver certificates against any silver bullion, silver, or standard silver dollars in the Treasury.” For every ounce of silver in the U.S. Treasury’s vault, the federal government could introduce new money into circulation. Kennedy brought nearly $4.3 billion in U.S. notes into circulation before his death, at which time no more silver certificates were issued. Read more about how Kennedy was on his way to putting the Fed out of business, here.

During the Civil War, President Lincoln needed money to finance the war. The Banks wanted to charge him 24 – 36 percent interest. Lincoln refused to put the country into debt the people wouldn’t be able to pay back. With Congress, Lincoln passed a law authorizing the printing of Treasury notes to pay for the war effort. He said, we “gave the people of this Republic the greatest blessing they have ever had – their own paper money to pay their own debts.” The Treasury notes were called “Greenbacks,” and they were used as full legal tender, for all debts, public and private.

The London Times printed the following, in response to Lincoln’s Greenbacks:

“If that mischievous financial policy, which had its origin in the North American Republic, should become indurated down to a fixture, then that government will furnish its own money without cost. It will pay off debts and be without a debt. It will have all the money necessary to carry on its commerce. It will become prosperous beyond precedent in the history of the civilized governments of the world. The brains and the wealth of all countries will go to North America. That government must be destroyed, or it will destroy every monarchy on the globe.”

And THIS, my fellow American Patriots, is exactly what our great President Trump meant to do when he promised to DRAIN THE SWAMP!